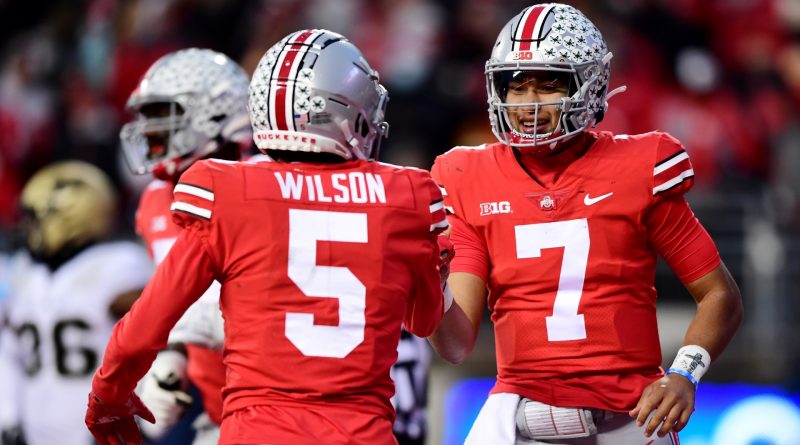 No. 2 Ohio State executed one of their most impressive wins of the season against No. 7 Michigan State with a 56-7 victory.

Quarterback C.J. Stroud was explosive at Ohio Stadium and completed 32 of 35 passes for 432 yards. His performance against the Spartans tied the single-game passing touchdown record with six in just the first half.

Running back Master Teague III led the Buckeyes with 25 catches for 95 yards. The senior scored a touchdown in the final four minutes of the game to secure the 49-point victory.

Despite going into the matchup as a Heisman favorite, running back Kenneth Walker III made a quiet performance for the Spartans. He finished the matchup making only six carries for 25 yards. Quarterback Payton Thorne also struggled against the Buckeyes’ defense, completing 14 of 36 passes for 158 yards and a touchdown. The Spartans converted for only 12 first downs while Ohio State earned 36.

Ohio State coach Ryan Day substituted Stroud for quarterback Kyle McCord after the Buckeyes missed a field goal attempt during their first drive of the second half. Cornerback Justin White picked off a pass from McCord during his first drive of the game.

With a confident win against the Spartans, Ohio State strengthens their chances at going to the College Football Playoff. On the other hand, Michigan State is expected to drop in the rankings after their second loss of the season. The Buckeyes are slated to face Michigan from Ann Arbor next Saturday as the Spartans will battle Penn State.

3:30 p.m.: Robert Cope rushes for four yards to seal the victory in Columbus.

3:27 p.m.: Anthony Russo steps in for Thorne at QB and throws two completions on the drive. After a two-yard gain, the Spartans punt from their own 24.

3:07 p.m.: McCord connects with Wiglusz for five yards to give the Buckeyes a first down from their own 35.

3:05 p.m.: After Thorne fires an incomplete pass on third down, the Spartans punt from their own 35. Smith-Njigbma makes a fair catch from the OSU 25.

2:58 p.m.: After Teague rushes for a loss of two yards on third down, Ohio State will punt for the first time of the game. Cade McDonald makes a fair catch at the MSU 18.

2:55 p.m.: Drew Jordan breaks up a pass from McCord intended for Fleming.

2:50 p.m.: TOUCHDOWN MICHIGAN STATE. Thorne connects with Coleman for 12 yards in the end zone to avoid the shutout. After the extra point, Ohio State leads 49-7 with 14:55 remaining.

2:43 p.m.: Thorne completes to Coleman for six yards and positions Michigan State inside the red zone.

2:35 p.m.: INTERCEPTION, MICHIGAN STATE. Justin White intercepts a pass from Kyle McCord and returns for 10 yards to position the Spartans at the 49.

2:30 p.m.: After Simmons rushes for one yard on the drive, the Spartans are forced to punt. Ohio State takes over from their own 29.

2:25 p.m.: Noah Ruggles misses his first field goal attempt of the season from the 21, keeping the Buckeyes ahead 49-0 with 7:17 remaining in the third quarter.

2:15 p.m.: Haskell Garrett sacks Thorne for a loss of eight yards on second down. After Thorne completes to Heyward short of the first down, the Spartans are forced to punt.

1:49 p.m.: Thorne throws consecutive incompletions and forces the Spartans to punt from the 42. Smith-Njigba makes the catch at the OSU 19.

1:47 p.m.: Simmons rushes for seven yards to give the Spartans a first down from the MSU 42.

1:45 p.m.: TOUCHDOWN OHIO STATE. Stroud finds Smith-Njigba wide open in the end zone for a five-yard score. Buckeyes lead 49-0 with 1:37 remaining in the half.

1:43 p.m.: Stroud finds Olave for 15 yards and marks a first down at the MSU 21. He then completes a short pass to Rossi, but the ball comes loose and bounces out of bounds. Ohio State resumes the drive from the 16.

1:42 p.m.: Williams rushes 19 yards and executes a spin move to give the Buckeyes a first down from the MSU 36.

1:32 p.m.: After gaining only nine yards on the drive, Michigan State is forced to punt again. Smith-Njigba returns and positions the Buckeyes at their own 15.

1:25 p.m.: Stroud completes to Smith-Njigba and Olave to give the Buckeyes a first down at the MSU 12.

1:20 p.m.: Stroud throws his second incompletion on a pass intended for Wilson.

1:18 p.m.: Smith breaks up a pass from Thorne intended to Joiner, forcing the Spartans to punt. Henderson returns 18 yards to position the Buckeyes at their own 39.

1:14 p.m.: Walker rushes nine yards to the MSU 34, but an offensive holding penalty against the Spartans pushes them back to their own 15.

1:02 p.m.: Thorne throws consecutive incomplete passes and forces the Spartans to punt from their own 31. Smith-Njigba returns for the Buckeyes at the OSU 30.

12:58 p.m.: TOUCHDOWN OHIO STATE. The Buckeyes capitalize on the fumble recovery as Stroud completes a short pass to Fleming in the end zone for the first touchdown of his career. Ohio State leads 28-0 under a minute into the second quarter.

12:55 p.m.: FUMBLE, MICHIGAN STATE. Thorne tosses to Simmons, but the ball is knocked out during the rush. The Buckeyes recover and take over from the MSU 44.

12:53 p.m.: Denzel Burke breaks up a pass from Thorne intended to Reed, but immediately grabs his arm and heads to the OSU sideline.

12:51 p.m.: TOUCHDOWN OHIO STATE. Stroud completes to Olave for 43 yards in the end zone, marking the 35th touchdown of his career. Buckeyes lead 21-0 with 2:31 remaining in the first quarter.

12:45: Thorne completes to Terry Lockett Jr., but he falls short of the first down and loses control of the ball. After an official review, the complete pass ruling is reversed, and Tommy Eichenberg gets credit for the breakup on the pass.

12:31 p.m.: TOUCHDOWN OHIO STATE. Stroud completes a deep pass to Wilson, who escapes defenders and runs into the end zone for a 77-yard score. Ohio State leads 14-0 with 8:03 left in the first quarter.

12:25 p.m.: After Thorne throws consecutive incomplete passes, the Spartans punt from their own 35 on their opening drive. Jaxon Smith-Njigba returns, and the Buckeyes will start their second drive from their own 12.

12:22 p.m.: Zach Harrison breaks up a pass from Thorne intended to Ricky White.

12:15 p.m.: TOUCHDOWN OHIO STATE. Stroud finds Olave for 23 yards in the end zone and puts the Buckeyes on the board in their opening drive. After the extra point is good, Ohio State leads 7-0 with 10:42 remaining in the first quarter.

12:03 p.m.: After a false start penalty on the opening play of the game, Stroud makes consecutive completions to Chris Olave for a first down.

12:00 p.m.: Michigan State wins the coin toss and defers. Ohio State starts with the ball from the 14 after the kickoff.

Ohio State vs. Michigan State will kick off at noon ET from Ohio Stadium in Columbus, Ohio.

How to watch Ohio State vs. Michigan State

This matchup between Big Ten powers will air on ABC. Chris Fowler will handle play-by-play duties with former Buckeyes QB Kirk Herbstreit joining him as the analyst. The two will be accompanied by Holly Rowe reporting from the sidelines.

Jake Aferiat contributed to this article. 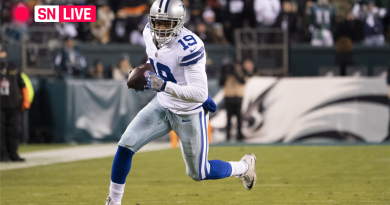 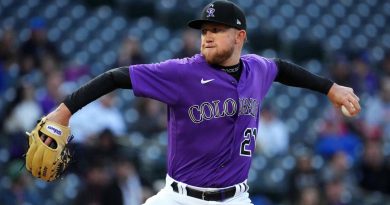 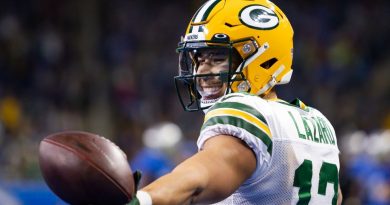