Donald Trump and his wife Melania have tested positive for Covid-19 and will quarantine barely a month before the US presidential election.

“Tonight, @FLOTUS and I tested positive for COVID-19. We will begin our quarantine and recovery process immediately. We will get through this TOGETHER!” Mr Trump tweeted.

Shortly after Mr Trump sent the tweet, the White House released a signed memorandum from the president’s physician confirming that both Mr and Mrs Trump had tested positive for coronavirus on Thursday evening.

“The President and First Lady are both well at this time, and they plan to remain home at the White House during their convalescence,” Dr Sean Conley said.

“Rest assured I expect the President to continue carrying out his duties without disruption while recovering,” he added.

The dollar, often viewed by investors as a haven, strengthened 0.2 per cent against a basket of its peers.

Mrs Trump tweeted: “As too many Americans have done this year, @potus & I are quarantining at home after testing positive for COVID-19. We are feeling good & have postponed all upcoming engagements.”

The president disclosed earlier on Thursday that he and Mrs Trump had been tested for the virus after Hope Hicks, one of his closest aides, tested positive just two days after the president shared the debate stage with Democratic rival Joe Biden in Cleveland, Ohio. Mr Biden’s campaign did not release any immediate statements about the president’s diagnosis or about whether the former vice-president would also be tested.

Ms Hicks had been among the aides who travelled with Mr Trump to the event, as were all of the president’s adult children, some of whom were pictured not wearing masks. Ms Hicks also accompanied Mr Trump to a campaign rally in Minnesota the following day, but was quarantined on the Air Force One flight home after showing symptoms for the virus, US media reported.

In a television interview with Fox News host Sean Hannity earlier on Thursday, Mr Trump appeared to suggest that Ms Hicks had contracted the virus through her interactions with “soldiers and law enforcement” officers who would “come over” to her.

His diagnosis represents a historic moment in the US presidency. While most people who contract coronavirus recover from the illness, the virus has been most detrimental to Americans aged 65 and over. Mr Trump is 74. Mr Biden is 77.

Sam Vinograd, a former national security adviser to President Barack Obama, tweeted, ahead of Mr Trump’s positive diagnosis, that the confirmation of Ms Hicks’ illness was a “code red” moment for the US government, noting how many White House and administration staffers work in close physical proximity to each other.

“A pandemic in the [West Wing] is a worst-case scenario. Immediately, critical resources will be diverted to mitigate any outbreak at the most senior levels of government.”

The president’s positive diagnosis comes amid a bitter campaign for re-election with Mr Trump trailing Mr Biden both in national polls and key battleground states.

Amid the falling poll numbers, Mr Trump had ramped up his public events schedule. He was holding multiple mass rallies a week — a style of campaigning that propelled him to the White House four years ago — despite criticism from public health experts who warn that such events can help spread the disease, especially when many in the audience do not wear masks.

At Tuesday’s debate, Mr Trump pushed back against the suggestion that the rallies were dangerous.

“We’ve had no negative effect, and we’ve had, 35 to 40,000 people at some of these rallies,” Mr Trump asserted. However, after an indoor Trump rally in Tulsa, Oklahoma this summer, Herman Cain, a former candidate for the Republican presidential nomination, contracted coronavirus and died. 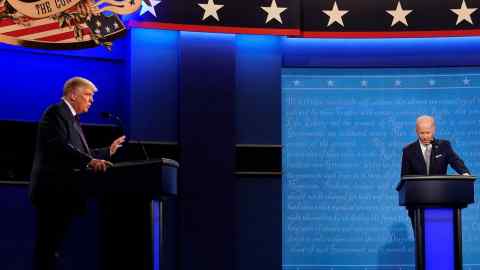 Mr Trump has also downplayed the effectiveness of masks — despite contrary advice from US public health experts — and suggested that wearing them made some people, such as waiters, more likely to transfer the disease.

The president has also mocked Mr Biden for wearing one.

“Every time you see him, he’s got a mask,” Mr Trump said. “He could be speaking 200 feet away from them and he shows up with the biggest mask I’ve ever seen,” Mr Trump said.

The US has confirmed 7.2m cases and more than 200,000 deaths since the start of the pandemic, according to data from Johns Hopkins University, more than any other country.

Mr Trump had been scheduled to host a rally in Florida on Friday night followed by two rallies in Wisconsin on Saturday. The White House published a revised schedule for the president on Friday morning cancelling all public events.

insurance: After health and life, now a standardised personal accident insurance cover in the work by IRDAI

India-Mauritius to sign comprehensive economic pact in near future