On Friday, model Bella Hadid made an unconventional appearance during Coperni’s Paris Fashion Week runway show, stepping out onto the stage in nothing but a pair of white panties. There, three talented creators at Corperni spray-painted on her outfit right in front of the audience.

Hadid was wearing a pair of white kitten heels and had been made up to accompany the final look, which eventually became an off-the-shoulder white gown with a trailing skirt and thigh slit. The material was not made of traditional spray paint, rather a fibrous thin material made from latex that eventually built up into something akin to actual fabric.

Her hair was up in a slick bun with some pin curls layered onto her forehead. As she strutted before the crowd, the dress received a round of applause. Coperni has been recognized for its more experimental designs and won the ANDAM’s Creative Label Prize in 2014, an award given to labels for their creative and commercial potential, and was a finalist for the LVMH Prize in 2015.

Also at the Coperni show was beauty mogul Kylie Jenner, who wore a dress from the design house as well. The strappy blue and black leather mini-dress showed off The Kardashian star’s figure, cinching in at the waist and featuring a plunging neckline and form-fitting bust. She styled it with long black extensions, matching pumps by designers Sébastien Meyer and Arnaud Vaillant. She accessorized with a pair of clip-on frameless sunglasses.

Coperni’s show was held in the Salle des Textiles at the Musée des Arts et Métiers in Paris, and was attended by invite only. The technique for spraying on latex to create textiles was invented by Dr. Manel Torres.

“We wanted to dedicate this moment to Dr. Torres, because we respect what he does so much,” Vaillant told Vogue. “We felt that it was absolutely necessary that he led the performance – to us, that makes the experience even more magical.”

Aimée Lutkin is the weekend editor at ELLE.com. Her writing has appeared in Jezebel, Glamour, Marie Claire and more. Her first book, The Lonely Hunter, will be released by Dial Press in February 2022. 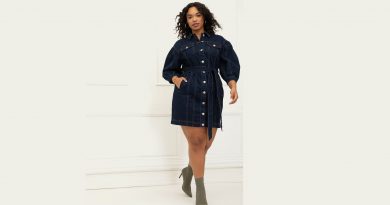 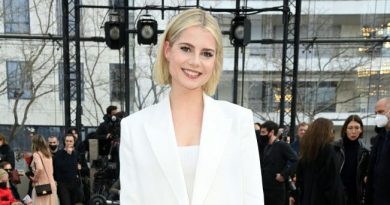