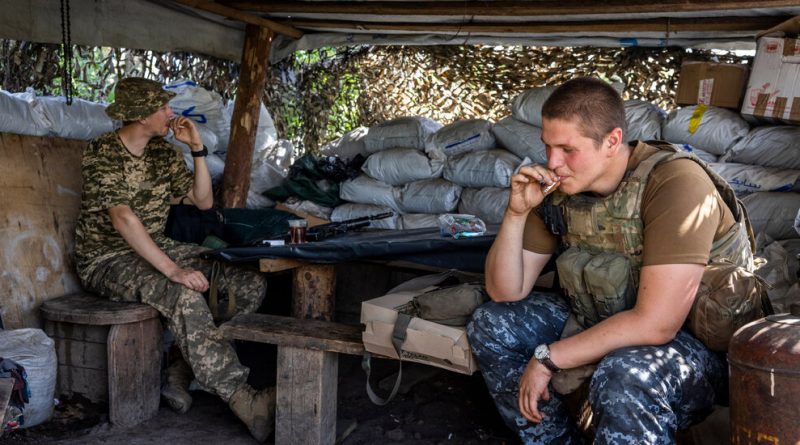 
As Ukrainian troops tried to claw back territory and stave off a blistering Russian assault along the country’s embattled eastern front, the government on Saturday sought also to repel a demand earlier in the day by President Emmanuel Macron of France that Moscow not be humiliated to improve chances of reaching a diplomatic solution.

“We must not humiliate Russia so that the day when the fighting stops we can build an exit ramp through diplomatic means,” Mr. Macron, who has sought to position himself as the world’s chief negotiator with the Kremlin, said in an interview with French newspapers. “I am convinced that it is France’s role to be a mediating power.”

“Calls to avoid humiliation of Russia can only humiliate France and every other country that would call for it,” Mr. Kuleba wrote. Instead, he argued, peace and the saving of lives could best be achieved by Russia being “put in its place.”

The exchange comes as the war has settled into what seems increasingly destined to be a slog.

The Ukrainians and Russians both claimed Saturday to be inflicting decisive losses against one another in the battle for Sievierodonetsk, the last major city in the Luhansk region of eastern Ukraine still under Ukrainian control.

But the fighting was not limited to that town. A senior Ukrainian official claimed on Saturday that the country’s troops had reached a milestone in grinding down the Russian invasion force in eastern Ukraine. Andriy Yermak, the chief of staff to President Volodymyr Zelensky, posted on the social networking site Telegram that most of a large Russian military unit had been destroyed in heavy fighting over the past weeks.

“Almost the entire 35th All-Russian Army was destroyed,” he wrote.

Mr. Yermak’s claim was supported by commentary from a Russian military blogger cited in a report by the influential Institute for the Study of War. Incompetent Russian commanders had failed to prepare troops for combat in a forested area near the city of Izium, the report said.

The claim of the routing of the Russian unit could not be independently verified.

Ukrainian soldiers interviewed over the past week have described fierce fighting in the forests around Izium, a strategic city that Russia is using as a base for attacks south toward the cities of Kramatorsk and Sloviansk. Ukrainian forces are also taking heavy losses, 60 to 100 fatalities a day, Mr. Zelensky said recently.

The British Defense Ministry said Saturday that Russia’s recent use of airstrikes and artillery fire has been a factor in its limited success in Ukraine’s east, a contrast with its largely ineffective air attacks earlier in the war. The Russian reliance on long-range strikes has probably depleted the country’s stock of precision-guided missiles, leading to more use of unguided munitions that can cause substantial civilian casualties, the ministry said.

And Russian and Ukrainian officials traded blame for the burning of the main temple of the All Saints hermitage, a 16th-century monastery in eastern Ukraine that is considered one of the three most sacred sites in Ukraine for Orthodox believers.

The increasing terror from the sky came a day after Ukraine, on occasion of the 100th day of the war, took stock of its successes in holding back and in key places repelling the invasion by Russia, which had sought to quickly conquer the capital, Kyiv, and topple the government. Mr. Zelensky insisted “victory will be ours” and announced that 50 foreign embassies had resumed activities in the capital.

But on the 101st day, Ukraine faced anew the harsh realities on the ground, and increasingly from overhead.

Russia’s airstrikes provided cover to their troops engaged in the bitter fighting in the contested city of Sievierodonetsk.

And Russian troops continued to target the last remaining bridge into Sievierodonetsk to keep Ukraine from moving in reinforcements, food and medicine into a city that has become the main theater of war and the focus of Russia’s war machine. Despite its early and devastating setbacks, Russia has come to occupy a fifth of the country.

The intensity of the Russian attack and frequency of Russian reinforcements to Sievierodonetsk led to predictions that the city would soon fall. But Serhiy Haidai, the governor of Luhansk province, who recently had a dour prognosis for the city’s survival, told Ukraine’s national television that Ukrainian troops had retaken 20 percent of the territory they had lost, adding that it was “not realistic” the city would fall in the next two weeks.

As Ukrainian forces try to take back territory in the East, its State Emergency Services of Ukraine has removed 127,393 explosive devices, with the efforts focused mostly on urban areas in the Kyiv, , Sumy and Zhytomyr regions that were occupied by Russia early in the war, according to a report by the United Nations Development Program.

Russia’s retreat from those areas has made them more accessible for clear-up operations, the report said, adding that Ukrainians had covered an area of more than 28,714 square kilometers (more than 11,000 square miles) but that it could take years to clear all of the mines in Ukraine. Ukrainian forces have also launched a counteroffensive near the occupied city of Kherson in the country’s south.

On the ground. As airstrikes intensified in the Donbas region of eastern Ukraine, the main focus of Russia’s onslaught, street fighting raged in the contested city of Sievierodonetsk. Jens Stoltenberg, NATO’s secretary general, warned that the conflict appeared to have become a “war of attrition” and advised allies to be prepared for “the long haul.”

But a punishing, costly and tragic military stalemate is increasingly foreseen by experts. Ukraine has been outgunned, but will soon receive long-range M142 High Mobility Artillery Rocket Systems, commonly known as HIMARS, from the United States. The exchanges of evermore lethal firepower will likely add to the many millions of people who have already been displaced, a death toll of at least 4,000 civilians and a Ukrainian economy already in tatters with roughly $100 billion in losses.

The Kremlin’s spokesman, Dmitri S. Peskov, said on Friday that Russia would continue what it calls a “special military operation” in Ukraine until “all goals have been attained.”

But one thing Russia had already achieved was international isolation and a solidifying of the Western alliance against it. Jens Stoltenberg, NATO’s secretary general, met Friday with Prime Minister Sanna Marin of Finland in Washington about the country’s application to the military alliance. He has advised allies to be prepared for “the long haul” and warned this week that the conflict had become a “war of attrition.”

As the battle lines become more entrenched between Russia and the West, experts predict Russian cyberattacks, global disinformation campaigns and a potential food crisis prompted by a Russian naval blockade. Ukraine is one of the world’s leading exporters of grain and cooking oil, and President Vladimir V. Putin of Russia has been accused by Western leaders of trying to leverage its control of those supplies to gain relief from sanctions.

And those sanctions continued to be felt. On Friday, Marriott became the latest multinational to suspend operations in Russia, where it had operated for 25 years. The hotel chain said restrictions set by Western governments made it impossible to keep going.

Ukraine’s fighting has for now preserved its statehood, but what that state would eventually look like is another matter. Russia’s strategy is essentially to pulverize specific areas with seemingly indiscriminate artillery shelling, killing or forcing to flee whoever is there before rolling in to stake the territory for Moscow.

It is a brutal way of waging war that some experts have compared to World War I and Ukrainian officials have called “medieval.” Craters from bombs and artillery shells gouge fields. Farmers collect rocket casings from cluster bombs in their barns. 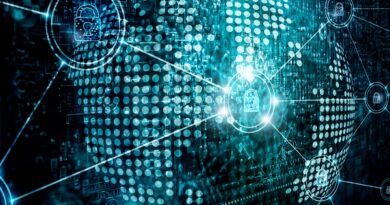 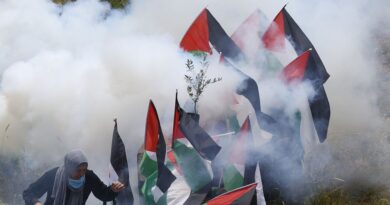 An annual day of Palestinian grievance comes amid the upheaval.